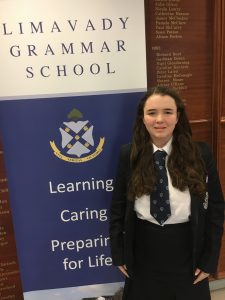 Congratulations to Limavady Grammar School pupil Anna McElhinney who last week was elected to the UK Youth Parliament as a representative for the constituency of East Londonderry. Her campaign centred on the issues of fair pay for 16 to 18 year olds and Mental Health provision for young people in the North West. Anna’s campaign video can be viewed via the following link https://youtu.be/UoR77W9pCgM.

Over 7,000 young people across Northern Ireland voted in the latest election for Members of Youth Parliament. Young people were able to cast their vote and declare which candidate they want to represent them in the UK Youth Parliament for the coming year, and campaign on the issues they feel are important.

Anna admitted to being “really excited” at the prospect of being a member of the Youth Parliament and wished to express her thanks to Mr Chris O’Donnell, Head of History and Politics at the Grammar School for helping her with her campaign.  Anna said that she is now “looking forward to trying to change attitudes to mental health amongst young people.”

40 Polling stations registered enabling young people from across Northern Ireland the opportunity to take part in these elections. Limavady Grammar School pupils impressed with a turnout of 61.8% of the vote, achieving a well-deserved Silver Democracy Award for their efforts.